As we’re in National Apprenticeship Week (5 to 9 March 2018), we thought it was time to put the spotlight on one of our hardworking apprentices who is a valued member of our team. 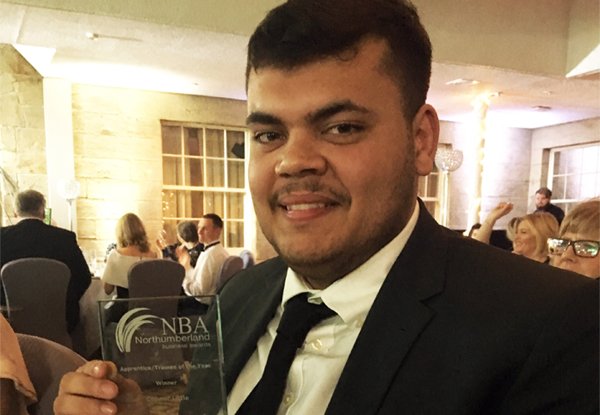 Connor Little, 21, from Hadston in Northumberland, is an Apprentice Quality Inspector. He’s been with us since August 2014 and he’s now in the final year of his four year apprenticeship, earning rave reviews from his colleagues for his dedication and commitment to the role.

Connor was recently shortlisted for the Apprentice of the Year award at the Northumberland Business Awards along with two other apprentices from Tharsus, Universal Wolf’s sister company; Rebecca Henry and Jack Thomas. He went on to win the coveted trophy, much to the delight of everyone on the team.

We caught up with Connor for a chat.

What were you doing before starting your apprenticeship?

Before my apprenticeship I went to sixth form where I studied business studies, product design, ICT & science. I started looking for an apprenticeship in February/March 2014.

Why did you choose to do an apprenticeship over the other options available to you?

I chose an apprenticeship because I felt I would be more suited to it than university. I learn better by doing, seeing the process in operation then giving it a go myself. Having decided that an apprenticeship was for me, I had considered doing an IT apprenticeship, but in the end engineering appealed to me more.

How did you find out about the opportunity at Universal Wolf?

I found out about the opportunity through the apprenticeships.jobs.uk.com website. I saw the job description and straight away it struck me as the type of place I could see myself working.

What really appealed to you about your role?

Initially the apprenticeship was general. The reason I landed in Quality was because it was part of my skills matrix to experience and get knowledge about each department for a few weeks at a time and as soon as I started working in Quality I knew that this was the department that I wanted to have a career in.

My days vary quite a bit, but typically any work day involves me dimensionally and visually checking parts and following projects through, dealing with customers through emails and in person, ensuring quality standards are upheld throughout the shop floor and our quality management standard procedures are adhered to throughout the business and updating and writing procedures.

What’s the most valuable thing you’ve learned from your apprenticeship so far?

That if you apply yourself you’ll never stop learning. As long as you’re motivated and willing to learn more, then there are many opportunities to do so within the business. I continually strive to better my knowledge because the more I learn the more responsibility I get and the more I can challenge myself as a person and as a key member of my team.

Is there anything you’ve learned that you weren’t expecting to?

I think in terms of what I’ve learned about myself, the one thing is that I didn’t expect was that I would be able to communicate as well as I can with my peers. It’s something I have learned on the job and from those around me. You hear about teamwork a lot growing up but I don’t think you can appreciate what that means to its full extent until you’re actually part of a team; one that on a daily basis relies on all of its members to be successful.

What’s your favourite thing about your role?

I would say it’s being able to see projects through from the start to the very end knowing exactly what processes are needed to make every part and understanding how it all goes together.

Where do you see yourself in five years’ time?

I would like to think I will have moved up a role within the Quality department. After I finish my apprenticeship in the summer I will be classed as an inspector so I would then be looking to move up to a Quality Technician within a few years. Hopefully one day I will become a Quality Engineer at Universal Wolf if the opportunity was available but for now I am fully focused on pushing myself to be the best Quality Inspector that I can.

Is there anything you didn’t think of before you started that you think it would help other potential apprentices to know in advance?

My biggest worry was that I would start my apprenticeship and wouldn’t understand anything about what I was going to be doing and that I possibly could get left behind, it’s hard to picture it before you’re doing it so I imagine other people might have similar concerns. In actual fact you get a complete plan of how the apprenticeship will work and that really helps. Once you see that, you won’t have so many fears about possibly ending up out of your depth. Of course it is going to be challenging but it is challenging in a structured way, designed to help you progress.

If you could talk to anyone considering taking on an apprenticeship, what would you advise them?

Do it! You get the best of both worlds; you’re in a learning environment but you get the bonus of ‘on the job’ knowledge. Of course there are pros and cons with apprenticeships, just as there are with going to university, but I for one have never looked back on my decision to take this route, I’ve gained so much from it.

Winning the Apprentice of the Year category at the Northumberland Business Awards last month was such an amazing experience; I never thought I’d do it and it was an incredible night!

Tharsus and Universal Wolf take on a new cohort of apprentices every year. Check out the careers pages on both websites for current vacancies.