Women in Engineering: An interview with Kerry Patterson

We asked our Head of HR Kerry Patterson for her thoughts on the STEM agenda, what we can do to encourage more women into STEM careers and why she thinks there’s currently such an imbalance between men and women in STEM subjects and careers. 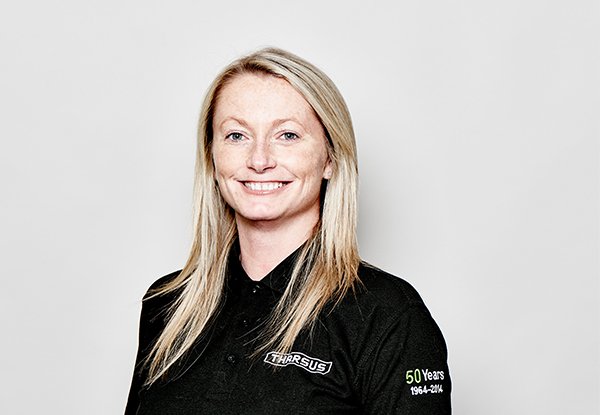 Please tell us briefly about your current role at Tharsus Group.

As the Head of HR for Tharsus Group I oversee recruitment and human resources for both Tharsus, the side of the business that has become the UK’s number one designer and manufacturer of commercial robotics, and Universal Wolf, which focusses on complex metal fabrication. Both companies have ambitious – but different – growth plans, which the HR strategy needs to support.

What is your take on the STEM agenda?

We visit a lot of local schools to promote STEM subjects and we see some fantastic work going on in this field. For example, we recently visited a local primary academy as part of their STEM week alongside some other local businesses. We had a lot of fun talking about the role of technology in WW2 and making it as fun as possible, getting the children into groups for a “rollerball challenge”. We wanted to make sure that the children realised how fun a career in engineering can be. Often the strength of what goes on in schools is dependent on there being a STEM champion in their leadership, so some are more organised and proactive than others. This would perhaps benefit from Government implementing a more structured approach.

What can we do to engage young people and the older female workforce into considering a STEM career?

It is sad that, although women make up half of the population, only 9% of engineers in the UK are women. Just over 22,000 women graduated in 2016 in the five core STEM subjects, compared to over 65,000 men. But getting people into STEM careers – especially engineering – isn’t just about encouraging them to apply. There are other factors at play as well, such as the cultural stereotypes we are all bombarded with when we’re growing up about what types of jobs “suit” men and which ones suit women. These are even reinforced in the toys that we get as children and in the stories we’re told as we grow up.

The culture and processes of companies also need to be more welcoming and flexible for women when they have qualified or trained in STEM subjects. When it comes to getting older female members of the workforce into STEM jobs there has to be more flexibility on the part of employers. Traditional industries often have traditional shift patterns, 8-4 every day, maybe a half-day on a Friday. This work pattern does not always cater for women who may have children or caregiving responsibilities. For example, women returning to the workforce after having a family are often looking for fewer hours than this, at least initially, and require a degree of flexibility.

How much interest is there in an engineering career among female candidates in your experience? What is the ratio of applicants for engineering roles (i.e. male-female)?

There is definitely an interest from women in engineering jobs, but in many cases, this is from skilled or professional qualified applicants. The Institution of Engineering and Technology estimates that around 9% of engineering roles are filled by women, this is just about accurate in our experience, but things are starting to change. The number of applications from young women wanting summer internships is much higher this year compared to last.

Do you think women bring something different to the party for such roles?

There isn’t a distinction to be drawn between female and male engineers; each individual is different and brings their own unique technical capability and personality to their team. Being an engineer is exciting because it gives you the skills to design and build pretty much anything you can imagine, see or touch – from chairs to walls, to websites. It doesn’t make sense to have only one half of the population representing the needs of the whole world. Engineers have a natural aptitude and passion for what they do and each team needs a diverse mix of personalities, which naturally benefits from including both men and women.

An excerpt of this interview was featured in the Journal’s Business Supplement on Women in Business and Education.